Traditional Myanmar music is played without notes. The orchestra leader plays the drum circle, sitting cross-legged inside a circular frame hung with 21 small drums. He tunes them by varying the amount of sticky rice and ash stuck in the middle of the ox-skin surface. He twists his torso to reach all his drums, which he strikes with his bare fingers. The gong circle is set beside it, in a smaller, lower frame. There can be 18 or 21 gongs, made of brass.

They are tuned by filling the bosses with a mixture of bees-wax and lead filings. They are beaten with raw-hide disks attached to the top of wooden handles. Bronze gongs, which give a softer sound, are hung on wooden frames. There is the oboe as a wind instrument, and tiny cymbals to keep the tempo. They accompany a bamboo clapper, not the long one cut from a section of bamboo seen with walking musicians, but a half of a thick stem of bamboo placed on its side and struck with a stick. The big drum is indeed big, its bulk is hung from a golden decorated frame topped with a mythical creature the Pyinsa Rupa, which has a dragon’s body, a fish’s tail, horns of a deer, wings of an eagle, and the trunk of an elephant. The solo instruments are the xylophone with bamboo slats, and the elegantly curved and tasseled Myanmar harp.

If it were possible to sum up Myanmar Traditional Music in two words they would be “Freedom” and “Gusto”. It was said by author “K” in his book, Myanmar Culture.

Myanmar traditional music has freedom to improvise, freedom from being note-bound, and freedom of variations, to mention only three.

“…….It is one of the most prominent features of Burmese music that through every song has, in a sense, a basic skeleton turn, in performance there is much variety of figuration to be found both between one player and another, and in one player’s rendering of the same tune or phrase at different times. Part of the player’s skill lies in his ability to invent new and more rapidly figured version of the phrase he has to play….The hnai, with a tone colour so different from that of the other instruments and with a technique which makes fast playing easy, is free to invent ever new and more extravagant variations on the basic figures” said John Okell, was Lecturer in Burmese, was attached to Mandalay University for two years, 1960 to 1961.

Myanmar musical instruments are looked upon as “instruments” for the display of the player’s own individual art.

“Myanmar Orchestra” is important not only for the human performances, but also for Marionette theatres and traditional and classical music itself.

This instrument was originally called a saing-waing because drums had to be “hung” (saing in Myanmar) down eight carve wooden planks which are in a “circle” (waing in Myanmar).

Later on it was called pat-waing which makes tune. This also means “drums” (pat in Myanmar) placed in a “circle” (waing in Myanmar).

The saing-waing and the pat-waing therefore mean the same though today only a pat waing together with its accompanying instruments, that is, the whole orchestra, is usually called saing-waing.

In Myanmar there is this complete set of drums of graduated sizes though foreign countries also have musical instruments stretched with leather but played not in a full set.

A set of Myanmar traditional orchestra consists of 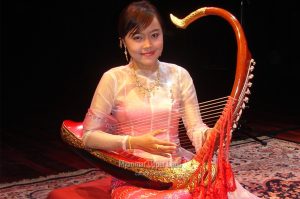 “Cuddled against the chest, but not a child; has a crooked tail but not a monkey; has a beard but not a man; able to produce sweet sounds, but not a maiden” This is a Myanmar riddle about the traditional harp, which is held in the lap when played. The curve of its neck is compared to the tail of a monkey, its tassels to a beard and the sweetness of its sound to that of the voice of a young woman.

In Myanmar, ancient chronicles say that harps were being played as early as in the Pyu Period. In February of 802 AD. Sri Khettra dispatched a Pyu music and dance ensemble to Chan-ann, the city of the Tang Dynasty of China. Tang Dynasty chronicles say that the Pyu musicians had with them two harps with pheasant’s head shapes, two harps with crocodile head shapes, one flat harp in the shape of a dragon’s head, one flat harp in the shape of rain clouds, two flat harps of big gourds, one flat gourd-harp with a single string and one small flat gourd-harp.

Among rock relief sculptures found on the walls of the Ananda Ceti built by King Kyansittha in Bagan era (1044-1287), is a harp which indicates that the harp was in general use in those days.

In ancient time, 3 strings were used, later it became 7, In Kong-baung Period (1752-1885), one of the noted Minister, Myawaddy Mingye U Sa then invented 13 Strings.

Later, a harpist by the name of Saya Nyein invented 14 strings, During the second world war the then famous harpist Alinka Kyaw Zwa U Ba Than used 16 Strings, adding 2 more strings.

Harp strings are strung and fastened to the arm of the harp by means of fastening cords or by means of keys pushed through the arm.

Now a day there are harps which can be tuned with the used of pinion like guitar. One can easily tune with the use of pinion, which are attached to the Arm of the Harp.

Myanmar Music has 7 tunes. They are said to derive from the harp as Myanmar harp is one of the earliest musical instrument.

The harp remains an important symbol of Myanmar traditional culture. Despite the growing influence of western culture, the instrument has adherents in all age groups.

Pattala (The bamboo xylophone of Myanmar) 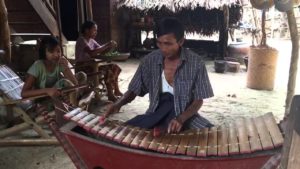 The main differences between the Pattala and the modern xylophone are:

The tone is not as loud as the Piano, but mellow. It is played by means of tow beaters one in each hand. Their heads are padded, which, together with the bamboo,accounts for the mellowness of the tones.

Myanmar Encyclopedia stated, the Burmese word pattala seems to be a derivative from Sanskrit and Mon. In Sanskrit, making music is vadya. In Mon language, the first syllable of the Sanskrit word is transcribed as bhat, and then the Mon word kala or kalah which approximates with the Burmese word talah derived from talyah meaning box is added. The Mon bhatkalah box musical instrument becomes the Burmese pattalya or pattala. 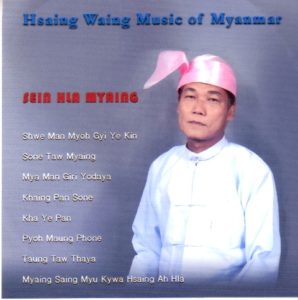 You may also love to visit the following Myanmar culture related pages.

Myanmar Traditional Dance
Myanmar choreography is a series of movements gracefully flowing from one step to the other with slight pauses in between, when the pose is rigidly held for a few …..  More Information

Myanmar Marionette
Puppets played an important role in the royal courts by serving as messengers of the king, conveying information that might have had a live person killed on the spot. They were used…. More Information

Performing Art
Myanmar traditional performance is basically different into two types. Zat Pwe is the traditional dance-drama led by a male dancer and Anyeint is a dance troupe ….. More Information